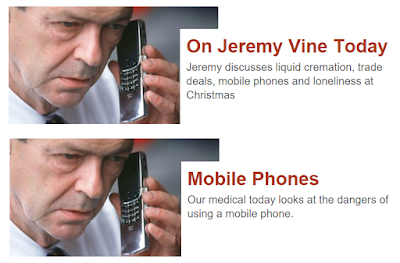 On 18th December 2017, BBC Radio 2 broadcast an edition of the Jeremy Vine show, containing a discussion of the health risks associated with mobile phones.


Radio 2 is a national radio station, which is listened to by many people across the UK (and elsewhere too).


Back in 2007, it broadcast the seminal "Panorama: Wifi, A Warning Signal", which got the programme makers into all sorts of hot water. Since then though, the Beeb has played it safe, and meaningful coverage has been patchy to non-existent.


Anyway, the Jeremy Vine show got off to a poor start, with an ill-informed preamble, and an "expert" who appeared to be unacquainted with the science - such as the trivial matter of radiofrequency radiation being classified as a possible carcinogen.


However some credit is due to the BBC, and the show's producers. The callers chosen to take part in the discussion articulated a range of important health issues linked to mobile phone exposure (along with other sources of non-ionising radiation), and I took some pleasure at the floundering and evident discomfort of the "expert" 😀.


Electrosensitivity, whether implicitly or explicitly, was a key part of the discussion.


Congratulations to the Beeb, and to you, for daring to cover the crucial, and very topical, issue of mobile phones and health.


I was hugely impressed by the callers to the show, who covered a number of important issues linked to the pulsed microwave radiation that mobile phones emit; this is especially significant, now that virtually all children own a phone.


However, regarding the show's expert, Dr Mike Smith, it's worrying that despite the research that he said that he has carried out into the issue of mobile phone radiation, and his assurance that there is no established evidence and known mechanism of harm:


1) Radiofrequency/microwave radiation, such as that emitted by mobile phones, cordless phones, wi-fi, smart meters, wearables, smart devices, mobile masts etc. was officially classified by the World Health Organisation/International Agency for Research on Cancer as a Group 2B Possible Carcinogen in 2011, based on an increased risk of brain tumours


3) 236 of the world's experts on the biological effects of exposure to the radiation from phones etc. have warned the UN, the World Health Organisation, and all UN member states of "global public health concerns related to exposure to cell phones, power lines, electrical appliances, wireless devices, wireless utility meters and wireless infrastructure in residential homes, schools, communities and businesses"


4) France has recently announced that it will ban mobile phones from schools, from September 2018


5) The California Department of Public Health has recently issued an advisory about phones and health risks, widely reported in the media


It is also concerning that despite Dr Smith being a founder member of the National Association of Family Planning Doctors, he seemed to be unaware of the mounting scientific evidence showing the harm to fertility being done by mobile phone radiation - especially relating to phones stored in the pocket - as well as the recently released study which showed a near 50% increase in the risks of miscarriage for pregnant women who are exposed to high levels of higher frequency magnetic fields, of the sort that are emitted by "wireless networks, smart meter networks, cell towers, wireless devices such as cell phones etc."


Dr Mike Smith did your listeners no favours in terms of providing a precautionary, realistic and informed appraisal of the current scientific evidence, so thank goodness that your callers more than plugged the gap.


This mail was sent through my wired Internet access, which is safer, faster, and less harmful to health and to the environment.


So far, I've had no response from Mr Vine, but I hope that at least somebody who was involved in the production of the show has read it.


Anyway, for your listening pleasure, please find a link to the whole show below. This will be available on iPlayer until January 2018, and the relevant part starts at about 1 hour 8 minutes in.


Also, I've saved the relevant section of the show to the "cloud", as an mp3 file, and you can download this by using the 2nd link below.