BOOK: The Invisible Rainbow: A History of Electricity and Life 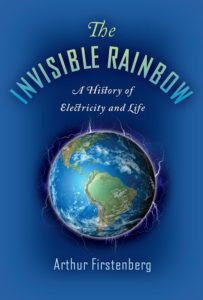 The Invisible Rainbow: A History of Electricity and Life, by Arthur Firstenberg

This book, written by Arthur Firstenberg in 2017, is one of the definitive texts on electrosensitivity, in all of its different shapes and forms. The 'Invisible Rainbow' of the title refers to electricity and the electromagnetic spectrum, most of which is completely invisible to humans, apart from a tiny portion of it which we can perceive as visible light; the colours of the rainbow.

Just as most of the electromagnetic spectrum cannot be seen with the naked eye, so it seems that 'electrosensitivity' is invisible to most non-sufferers. Symptoms arising from chronic exposure to electromagnetic fields (EMFs) and radiation in the environment are probably experienced by most, if not all, people, and yet - officially - these harmful effects don't even exist, or else they are given to different causes.

As well as writing this book in 2017, Arthur Firstenberg has launched the INTERNATIONAL APPEAL to Stop 5G on Earth and in Space, which to date has been signed by 183,714 signatories from 208 nations and territories (as at 2nd December 2019).

This Appeal is an urgent call to the UN, the World Health Organisation, the EU, the Council of Europe, and worldwide governments, to take action:

'We the undersigned scientists, doctors, environmental organizations and citizens from (__) countries, urgently call for a halt to the deployment of the 5G (fifth generation) wireless network, including 5G from space satellites. 5G will massively increase exposure to radio frequency (RF) radiation on top of the 2G, 3G and 4G networks for telecommunications already in place. RF radiation has been proven harmful for humans and the environment. The deployment of 5G constitutes an experiment on humanity and the environment that is defined as a crime under international law.'

With proceeds from the sale of this book going towards the costs of the 5G Appeal, I thought that now was a good time to write a short post to remind people about this excellent book, and especially so in the run-up to Christmas. The book definitely isn't cheap, and it's not widely available, but it is well worth searching out.

I've included links to some reviews of this book below, and at the bottom of this post, there are details of where to purchase it from.

Reviews of The Invisible Rainbow

'I found it extremely well-researched, well-written, and generally/genuinely fascinating; I certainly learnt a lot of things about electricity and electrosensitivity that I didn't know before.

As others have mentioned elsewhere, it's got a fascinating chapter called "Porphyrins and the Basis of Life", although I really need to re-read this to take it all in. I remember feeling that I was on the verge of an epiphany on reading it for the first time...!

Arthur describes some pretty spectacular and persuasive correlations between EMFs and a variety of diseases, including, topically, influenza. I guess that this sort of thing will be familiar to anyone who has read Sam Milham's book - especially when it comes to the so-called diseases of civilisation.

So yes, a riveting, eye-opening read, and up there with The Body Electric by Robert Becker I think (although thankfully without acres of felled woodland devoted to the subject of amputated salamanders...!).

The only thing that I thought could have been delved into in much greater detail - and perhaps this will be in the next book - is the huge conspiracy to bury this issue and pretend that nothing's actually wrong - the key individuals and organisations behind this, their methods, their vulnerabilities, their conflicts of interest and motivations, and so on.

Having said that, the book is sub-titled as "A History of Electricity and Life", and it certainly lives up to that description in bucket-loads. Well worth reading, if you can buy or borrow a copy.'

The Invisible Rainbow - A REVIEW AND APPRECIATION, By Miriam Lindbeck, EMRS - Ecodwell

Book Review, by Frank de Vocht (Dr Frank de Vocht is a member of the COMARE committee in the UK, which guides the Government on issues relating to ionising and non-ionising radiation)

Where to buy the book:

Direct from the Cellular Phone Task Force website in the U.S.

Down to Earth EMF Services (books can be despatched to Europe and the UK):