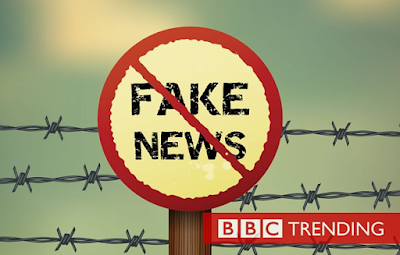 
Last year, I complained to the BBC, concerning its woefully biased coverage of the EMF/Health issue on a tv programme it broadcast called Health: Truth or Scare:

To cut a long story short, the BBC refused to accept that this programme was biased and that it misrepresented the science on the health effects of wireless technologies such as mobile phones, mobile masts, Wi-Fi and smart meters (although it did concede one or two points that I made in my complaint).

I escalated my complaint through all stages of the BBC's complaints process, and then, because I still wasn't satisfied with the responses that I received, I escalated it to the regulator, Ofcom. My complaint then, to all intents and purposes, disappeared into the ether. I may publish the full correspondence between the BBC and myself on this blog at some point.

Since then, the BBC has continued to deny the health effects associated with technologies such as 5G, as you can see from these articles on the BBC website:

In November 2019, an edition of the BBC's Click programme featured predictably biased coverage in response to the question, Is 5G Safe?

A subsequent interview with Professor Tom Butler, carried out by Claire Edwards, responded to this biased programme:


On 14th April 2020, Radio 4's Today programme did a piece on 5G 'conspiracy theories', following recent alleged links being drawn between Coronavirus and 5G, David Icke's recent interview on the subject, numerous mobile phone masts being set on fire by alleged anti-5G activists, and some controversial comments on the subject made by Eamonn Holmes on ITV's This Morning programme, as detailed in this article (and many others):

On the Today programme, Justin Webb discussed the 5G 'conspiracy theories' with the BBC's technology correspondent, Rory Cellan-Jones. Here's the audio of this conversation, in MP3 format:

This is a transcript of what Rory Cellan-Jones said on the issue of advocates who say that wireless technologies such as mobile phones and Wi-Fi are harmful (with all of the 'ers' and 'ums' removed):

[Concerns about wireless technologies] '...go back a long way, remembering when there was material about WiFi; attempts to ban WiFi from schools; there's been a vibrant little community claiming that this electromagnetic radiation causes harm, [that] there needs to be curbs on it, [that] there's evidence of harm, [but] without any scientific backing behind them...'

So, the BBC's Technology Correspondent, Rory Cellan-Jones, claims that there is no scientific evidence to show that wireless technologies are harmful. This is, of course, an outrageous and irresponsible lie, and it will surprise no reader of my blog that I fired off a complaint to the BBC.

My Complaint to the BBC

My complaint is that Rory Cellan-Jones misled the British people, on air.

In his somewhat rambling discourse concerning the supposed lack of health effects associated with wireless technologies such as mobile phones and WiFi, Mr Cellan-Jones said (emphasis mine):

'...go back a long way, remembering when there was material about WiFi; attempts to ban WiFi from schools; there's been a vibrant little community claiming that this electromagnetic radiation causes harm, [that] there needs to be curbs on it, [that] there's evidence of harm, [but] without any scientific backing behind them...'

The claim that there is no scientific evidence behind wireless radiation concerns simply is not true. I am surprised that a seasoned correspondent like Mr Cellan-Jones either hasn't carried out some basic research, or else has chosen to ignore what the non-industry, non-conflicted science clearly shows.

Here are just a few rebuttals to the outrageous, and completely untrue, claim made by Mr Cellan-Jones:

1) The formal classification in 2011 of Radiofrequency (RF) radiation as a Group 2B Possible Carcinogen by the World Health Organisation / International Agency for Research on Cancer (IARC), on the basis of an increased risk of glioma. (1)

2) The recommendation of an IARC expert committee that high priority be given to a re-evaluation of RF radiation, in light of recent scientific findings. (2)

3) The results of two recent scientific studies, carried out by the National Toxicology Program in the U.S., and the Ramazzini Institute in Italy, which found 'clear' and 'statistically significant' evidence respectively of a link between mobile phone / mobile phone mast radiation and tumours, as well as DNA damage. (3)

4) The 30,986 scientific papers on the effects of electromagnetic fields that are held on the EMF Portal, which is maintained by RWTH Aachen University. (4)

This does not represent pseudo science, or fake news, made up by 'deranged' individuals and groups.

The BBC should not be in the business of disseminating industry propaganda and misrepresenting the science – especially when there is such an extensive scientific literature showing harmful effects, and where there is an overriding obligation for the nation's broadcaster to give the public accurate, fact-based information (no matter how inconvenient it may be).

The organisation, and Mr Cellan-Jones in particular, needs to issue a public apology for such irresponsible and misleading coverage of this hugely important issue, and should ensure that  future output concerning the health effects of wireless technologies is based upon what the science actually shows, rather than on what the BBC might wish the science to show, given its own enthusiastic involvement with 5G technologies.


I'll update this blog post with any response from the BBC to my complaint.