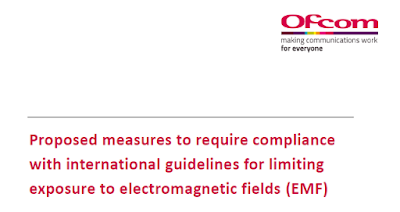 Quite often, people who have recently joined up the dots and linked exposure to EMFs to their symptoms - in other words, people who have realised that they are 'electrosensitive' - try to get their heads around what has happened to them, and why. I know that I did.

A dawning awareness of the harmful nature of the electrosmog which now pollutes our homes and everywhere else prompts incredulity that the 'authorities' can let it happen.

Surely, if the NHS, Public Health England, the Government, the World Health Organisation, and so on, are just told that people are becoming extremely ill as a result of all of the wireless technologies everywhere, they will urgently leap into action, and sort this growing public health disaster out with all of the determination and competency that they are currently showing in handling the Coronavirus pandemic?

(Ok, perhaps with a little more determination and competency than that...).

In the early days, like many people, I tried all of the usual things; writing letters to my MP about my electrosensitivity, trying to get health professionals to recognise my condition and do something about it, and writing to Public Health England. All to no avail, of course.

I could not understand how it benefited anyone for me, and for others like me, to be severely and chronically impaired, unable to work, and with no realistic prospect of 'getting better'. What I wasn't factoring in was the other side of the equation; just how imperative it is for organisations and individuals with vested interests that the link between electrosmog and harmful health effects is NEVER publicly admitted.

As I now know, electrosensitivity is the thin end of the wedge. Admit the existence of this 'condition', and the myth that electrosmog is safe for all is blown away. If some - i.e. 'electrosensitive' - individuals can be shown to be directly harmed by technologies that are said to be safe, then it also follows that individuals who do not consider themselves to be affected by electrosensitivity may also be being harmed. This, of course, is exactly what the independent, non-conflicted, science overwhelmingly shows.

Once I had passed from naivety to a terrible awareness of how things really are, I became very interested (perhaps 'consumed' is a better word) in the conflicted individuals and organisations that:


All of which brings me to ICNIRP - the International Commission on Non-Ionizing Radiation Protection. It's a grand and authoritative-sounding name, isn't it?

This organisation (basically, a private, self-electing and self-appointed club) sets EMF exposure Guidelines which are very convenient for the tech and communications industries, and deeply harmful for the citizens in every single country that adheres to their recommendations, including the UK.

ICNIRP offers the following protection from Radiofrequency (RF) Radiation, which wireless devices and infrastructure use in order to communicate with other wireless devices and infrastructure: if the RF radiation doesn't actually cook you, then it's fine! A number of countries adopt maximum RF radiation exposure levels that are significantly lower than ICNIRP's, but unfortunately the UK isn't among them.

Most right-minded people would say, no, of course I wouldn't. And yet, these same people now spend their lives immersed in a sea of microwaves, from all of their own wireless devices, plus the second-hand microwaves they are exposed to from satellites, mobile masts / cell towers / small cells, WiFi, smart meters, DECT cordless phones, DECT baby monitors, tv and radio transmitters, and so on.

We are all living in what is basically a low-powered microwave oven, and yet very few of us realise it, and even if we did, there's very little that we can do about it - other than replace our own wireless devices with safer alternatives. Meanwhile, so many of us are just becoming sicker and sicker...

Anyway, all of this preamble leads me to the subject of this post, which is a consultation by Ofcom - the 'government-approved regulatory and competition authority for the broadcasting, telecommunications and postal industries of the United Kingdom'.

Ofcom wants to change the law to formalise the use of ICNIRP's Guidelines in the UK, so that all installations of telecoms infrastructure, for example 5G masts, are required to adhere to them. Remember that ICNIRP's Guidelines - to the great convenience of the industry (what you might call 'Big Wireless') - only stop you from being cooked. Nothing else.

Ofcom is holding a consultation to solicit views from stakeholders, including the public. This is our chance to put on record our objection to the use of ICNIRP's Guidelines in the UK. I would argue that it is strongly in our interests to take part in this consultation. We may not achieve a revolution, but the alternative is just to sit back, and let it all happen. I would hope that many EHS and EMF-aware people would feel that this is not something that they could countenance doing.

If you'd like to send your own comments in to Ofcom, the link below will take you to the relevant page on the website. Please note that submissions must be made by June 12th 2020, and that there is a form to fill in with your responses, and a document explaining the rationale for the consultation.

My own submission (in addition to completing and returning Ofcom's form, I provided additional comments, which you can access via the link below)