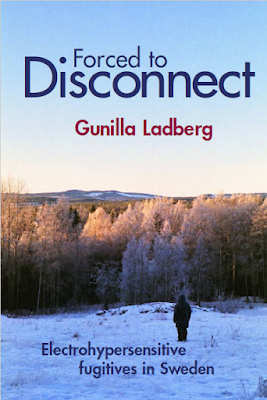 [This post contains links to two e-books on electrosensitivity; Forced to Disconnect, and Black on White. Both were written in Sweden, are available in English, and can be downloaded for free]

This book is about people in Sweden who after having developed hypersensitivity to electricity or/and microwave radiation from wireless technologies have become fugitives in their own country.

I must first say that neither I nor anyone in my family has been affected by this condition.

I started to write about the issue after learning about the health hazards caused by cell phones and other wireless communication gadgets. That’s how I met a number of people who had become electrohypersensitive (EHS).

This condition has disabled some of them to such an extent that they had to flee from their homes and workplaces to find refuge in forested areas as far away from electrical power and cell phone towers as possible.

Hearing their stories was a major eye-opener. The fact is that some of my fellow citizens are forced to live as fugitives in their own country! They are not fleeing from wars or terrorism, but from modern technology.

They are fugitives in one of the safest countries in the world, or, what once, before the introduction of the latest in information technology and wireless communications systems, was a safe country.

The stories of these people need to be told – for their own sake because of the obvious injustice, and because this is everybody’s business. Their stories are stories about us. People with EHS are no different from you or me. The only thing that separates us from them is luck.

I have travelled around the country and met many EHS fugitives. I have interviewed some twenty people out of more than 600 identified by The Swedish Association for the ElectroSensitive.

As certain themes in their stories kept coming up again and again, I decided to dedicate separate chapters to them.

Some EHS fugitives wished to remain anonymous, while others did not mind going public. “I believe everyone is responsible. That’s why I want to tell my story,” one person said.

However, I decided to give them all fictitious names as not to spotlight the individual, but to emphasize that they can be anyone of us.

Black on White - Voices and Witnesses about Electro-Hypersensitivity, The Swedish Experience (143 pages)

Black on White is a translation of a Swedish book, Svart på vitt. Röster och vittnesmål om elöverkänslighet by Rigmor Granlund-Lind and John Lind. It is available in English as a pdf-document, see below.

This book, published in 2002, is based on documents to the Council for Work Life Research (RALF in abbreviation) - statements at a public hearing 8 March 2000 and letters in connection with the hearing – from more than 400 electro-hypersensitive people or from people in close contact with them as relatives, doctors, EMF-reduction engineers, etc.

Here people explain what started their electro-hypersensitivity. Computers were perceived as the most usual triggering factor, followed by presence of amalgam/amalgam removing, fluorescent lights and low-energy lamps, cellular phones/base stations and ordinary telephones, chemicals and photocopiers.

In 2000, symptoms were primarily caused by computers but to a large extent also by all electrical installations, fluorescent lights and low-energy lamps, cellular phones and base stations, ordinary telephones, radio, TV, cars, trains, airplanes, copiers and dental work such as removal of amalgam.

What then are the symptoms? Skin problems top the list, followed by sensibility to light, eye problems, problems with the heart and the blood pressure, headaches, migraines, pain in joint and muscles, dizziness, concentration difficulties, nausea, memory disorders, endocrine reactions and many more.

There are also parts of the book concentrating on the important role of chemicals, on the benefit of EMFreduction, on the "electro-refugees" - that is those who cannot remain in their homes because of cellular base stations in their neighbourhood - on the social consequences for those afflicted and on the way the healthcare institutions and the political authorities deal with the problem.

An important chapter gives ideas to research, strongly criticizing provocation trials, explaining the reason why they are valueless.

The percentage of letterwriters with higher education was large – some of them were postgraduates and many were engineers – and they all had the ambition to describe their handicap in as much detail as possible for the benefit of future research.